Archive from "Coaching and Leadership"

When should you seek a coach for your company?

If you are a manager, director or even the owner of your company, you will inevitably reach a point where you will require a coach. There are numerous reasons as to why you might eventually seek a coach which fall into the following main categories:

Overall, it is important to note that some questions should be raised prior to making a choice on which employee to coach.

2. Does this person understand that coaching will require them to question and challenge themselves, making them leave their comfort zone?

3. Does this persons schedule allow them to dedicate themselves to recieving coaching?

Make peace with what is

Marshall Goldsmith tells us the importance of accepting the present and letting go of burdens to always be present.

Triggers: Why is it difficult to become the person we want to become?

Marshall Goldsmith tells us about the concept of triggers, and why it may be difficult at times to become the person we want to become in our minds.

Leadership in the digital age: growth through discomfort

Leaders today will face, from now on, a different challenge than those who came before them.

With the advent of the digital age and social media exposure, they now can be seen much more clearly than before. Leaders, until a few years ago, were manily composed of a name and a position with came along with its function and salary, making it seem as if the leader was a sort of unknown figure who oriented the companies direction. This form of “anonymous leadership” is slowly dissapearing.

Today, leaders now are much more exposed and have the possibility of having direct contact with their employees all around the company. A research shows that 76% of global executives consider the exposure of their CEOs online to be important, giving the position of the CEO a higher degree of accountability.

This all implies in taking a big step of the comfort zone. This higher degree of transparency and accountability will require a truly ethical conduct on behalf of CEOs, making the position less attractive to certain individuals who do not like the idea of having to link their personal image to certain decisions they make.

Such exposure will result in a certain openness of the CEO and the company on many different fronts such as consumer complaints, competing companies, shareholder pressure, etc.

In summary, the new age of leadership will be one in which the leaders ego will do him no little to no good. Positive exposure of his own image aligned with social media tools will force leaders to leave their comfort zone in order to conduct their bussiness in an ever so ethical manner, as the eyes of the world, and from those within the company, will be watching.

A work routine is supposed to be a part of one’s life rather than to BE one’s life.

Therefore, if you have the opportunity to work flexbile hours, you can make your own working schedule, why not make it the way you feel will be the best for you?

This infographic shows the daily routine of famous creative historical figures. It is interesting to see the diference from one another! How about you? How would your daily routine look like if it were to be displayed on this graph? 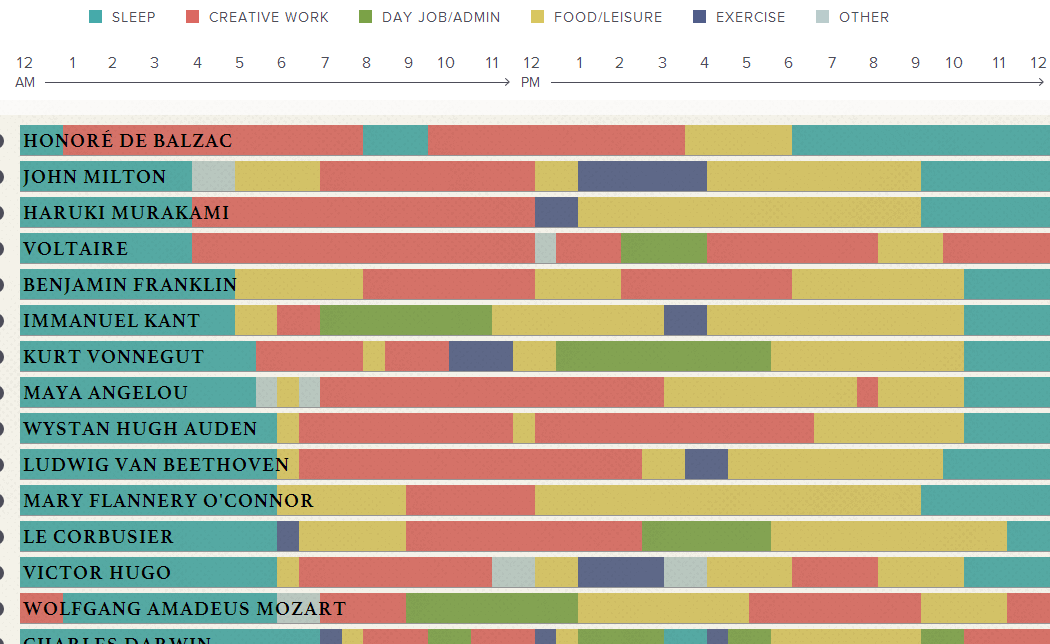