10 ways to motivate your employees

This animated video shows us ten simple ways in which we can help employees to feel more motivated.

Thins such as listening to their needs, helping them balance their personal and professional life and recognizing their performance can go a long way!

The importance of having freedom in your job

Many companies begin to lose the workforce they have built over the years. Why? One of the main reasons is the lack of freedom they give the workers.

Look at this interesting infograph which outlines the reasons to why the work force is migrating towards freelancing and what their wishes are exactly. 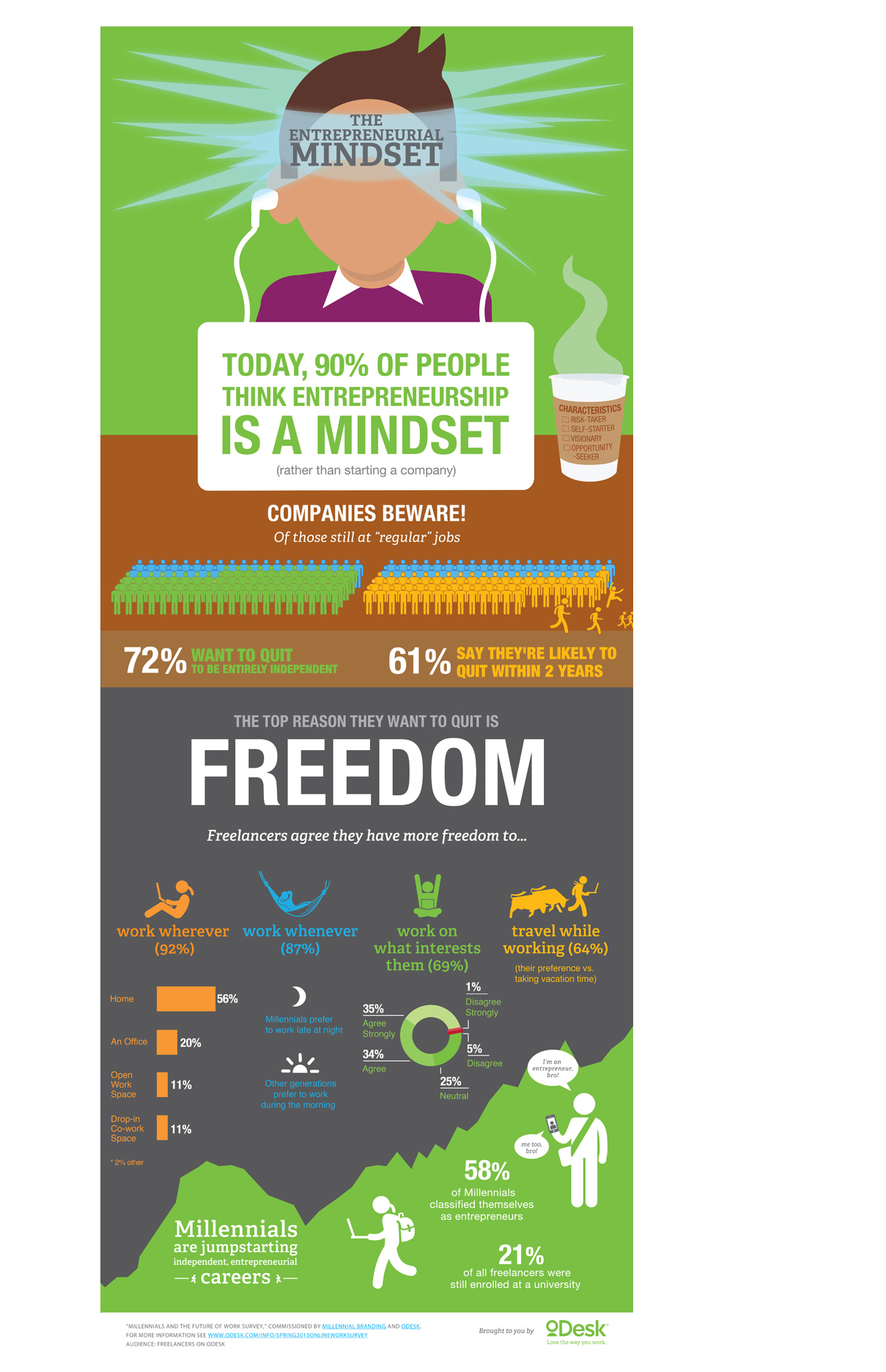 In a previous blog post, we talked about how talent retention has become a central piece to company strategy.

It is no longer acceptable to simply let talent leave your company. The cost of a turnover can exceed well over that of the annual salary of the worker which you have lost.

Here are some tips to reduce the turnover rate in your company:

Since the financial crisis of 2008 in the United States and most recently the fiscal crisis in the European Union, companies have begun to give great importance to employee retention due to the large value involved in employee turnovers. A few years back, this was not as essential to the strategic planning of companies as it is today. Why exactly then has such an item become a priority on the agenda of most companies?

Cost of losing an employee

Studies show that the cost of losing an employee ranges from tens of thousands of dollars to almost twice the value of their annual salary. Overall, other factors compose this cost, such as:

The aspect of maintaining a solid company culture is reflected by employee retention. If a long time worker leaves, the company will suffer much more than a financial setback. The once intact engagement and motivation which that employee represented to others will be shaken.

Economic value of an employee over time

The following graph demonstrates how an employee develops in terms of value within an organization. The task of a Human Resources department is to facilitate the employee’s evolution upwards in this curve, as desmonstrated below. 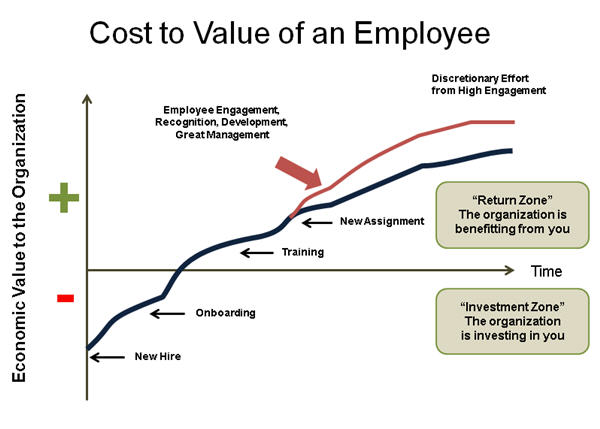 Many tools are available to make employees accelerate this development some of which include training, seminars and specially coaching.

The younger generation of employees has a different vision of what is the “perfect job” compared to that of previous generations. Even though some desires are similar, the younger generation has the characteristic of being much faster paced and wanting a more dynamic and free work environment. Therefore, some things should be considered when creating such strategy, tailored to suit your company’s needs:

How Employees Decide to Quit

Employee turnover is very much on the agenda this year. In fact, a report from OI partners has shown that 51 percent of employers surveyed in North America reported higher turnover compared to just 30 percent reporting higher turnover in 2012.

Unsurprisingly, the report also found that 78 percent of employers are concerned about losing high potential talent, and in fact, retaining talent was the number one priority this year, making it a higher priority than hiring new talent, which landed at number two.

As you can see, retaining and/or reinvigorating a superstar is seen as a more effective strategy than finding new talent to fill a gap left by a superstar. This resonates with other studies, which show that promoted individuals tend to outperform external recruits.

So talent management professionals should be focusing on staff retention and one of the ways to do this is to understand the psychology of why employees decide to quit, i.e. what is the psychological process of quitting?

I recently found some research called the unfolding model of voluntary turnover, which seeks to explain the run up to the decision leading to an employee quitting. The research, by Mitchell and Lee, identified five pathways to voluntary turnover, as shown in the image below. 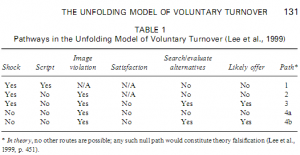 Pathways, 1, 2 and 3 to quitting, which account for around 65 percent of voluntary turnover, start with an initial jarring shock which prompts thoughts of quitting. This shock could result from occurrences such as being passed over for a promotion, an enforced pay cut, a new bad boss, a lower than expected pay rise, etc. In the majority of cases, the decision to leave is largely based around one event/reason.

In pathway 1 and 2, followed by just 10 percent of voluntary leavers, employees leave without another job in place in a short to very short period of time. These employees may be unreachable.

In pathway 3, followed by around 55 percent of all voluntary leavers, employees find a job before leaving meaning there is a relatively long period between the shock event and decision to quit, giving your business time to react.

Pathway 4A and 4B

In pathway 4A and 4B to quitting, followed by around 35 percent of voluntary leavers, the decision to leave follows after a long period of accumulated dissatisfaction resulting from a range of small negative events which accumulate in a ‘drip drip’ capacity. Most voluntary leavers who go down this path get an alternative job offer in hand; so, the time period between deciding to quit and actually quitting can be very long, once again giving your business time to react.

So, what’s the takeaway here? In general, the time between an employee deciding to quit and actually quitting is usually very long, meaning there should be ample time for businesses to turn the employee around assuming they have the appropriate systems in place to spot and remedy employee disengagement.

In fact, I believe that employers wanting to compete effectively in the war for talent should have systems in place to both identify and address disengagement before it becomes critical.